March 27, 2009
Someone recently sent me a VERY interesting link:
The Story of an Experiment 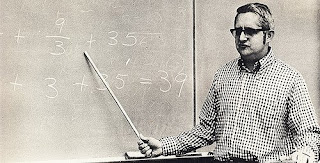 Photo by foundphotoslj
This experiment in math teaching was done in the 1930s by by L. P. Benezet, and the main gist of it was that formal arithmetic studies were delayed until the latter half of 6th grade. Instead, the instruction concentrated on "teaching the children to read, to reason, and to recite - my new Three R's."

They also were taught about numbers they encountered in their reading materials, about time, about measuring units, estimation, and coins. Finally in 5th and 6th grade they also learn skip-counting. Formal arithmetic, meaning paper-and pencil work with addition, subtraction, multiplication, and division using a textbook began in latter half of 6th grade and continued till 8th grade.

The experiment was a huge success. Mr. Benezet compared the children's abilities in the experimental classroom to those of the traditional classrooms, and every time the "experimental" children were able to reason out word problems correctly, whereas those taught traditionally just stumbled all around, trying to find some formula to use.

I find this story very interesting and I've read it before. I can't say that approach wouldn't work better than "traditional math" even in today's world. Maybe it would! Those kids were taught to reason AND they were also taught some basic math skills, just without the use of mechanical formulas. So, they learned to think and reason it in their heads.

My guess is that such an approach would be even better if it was accompanied with some, what you might call, formal, instruction in math, BUT very much avoiding the idea that you use some formula that the teacher gives you "on a platter".

For example, in the experiment the kids were supposed to learn the numbers they saw in books and learn the page numbers such as 76 and 293. But, I wonder if this would have resulted in quicker/better understanding of number system had they been taught explicitly about hundreds, tens, and ones (the place value). Then again, we don't know how exactly the teachers explained those- maybe they did explain them in a very good way.

One of my instructors in university often mentioned the idea of school math being "announcement math" or "announced math". It's announced from a higher authority, without giving kids much in the way of justification, or the opportunity to find the truths themselves and thereby understand them deeper.

I do try to avoid that in the elementary part of math. In fraction studies, I refrain from giving "formulas" for fraction addition or division or simplification until kids have had a lot of experience with "doing" it with the fraction pictures. And even then the formula can be like a "sideline" that is mentioned in passing. I don't want to even deal with LCMs and GCFs when it comes to fraction math in elementary grades.

In general I always try to justify the math and let children experience and understand it on a conceptual level.

As regards to the experiment, they wanted kids to learn reasoning by the usage of good books and reading a lot. Then, when their brains were trained to a certain point, arithmetic was studied from books.

Reading a lot of books and learning reasoning is definitely a good way to go. But, I feel that mathematics, when taught right, can also have a part in this "training the mind" process and learning reasoning. It is very well suited to that if it is taught well during the elementary years - having the emphasis on thinking skills and concepts, not just memorizing formulas.
philosophy teaching

Jennifer said…
This is a great post! I had never thought of teaching math that way. What a wonderful idea. I don't think you truely learn something unless you get the concept behind it.
12:26 PM, March 27, 2009

Brian Foley said…
One of the things I appreciate most about your blog is that you introduce us to interesting things like this. I also like your sensible take on the issue.
This is sort of like "Show-and-Tell" vs. the Socratic Method.
I've always been a fan of the Socratic Method, but there is a serious flaw - They killed Socrates because of it. So I guess it needs to be tempered.
Your Ideas about being able to introduce some formal math, just not a bunch of memorized facts in exclusion of thinking skills, seems to be the way to go.
Thanks for telling us about the Benezet experiment.

mathandchess said…
Conceptual teaching or procedural teaching should never become an issue if you do both.

I have found in my teaching that to stress one side too heavily, only leads to more consfusion. It is very important to teach concepts so kids konw why they are doing this way for example, 3-(+4)= 3 +(-4) but why? We can teach them on how to use 0 property to demonstrate that the above 2 statements are equal but in reality, the kids would have to "remember" that when doing actual integers otherwise, it would be "too" slow in getting their answers by continuing applying "conceptual" understanding.

Practice. practice and practice to get the fluency after the concepts are taught.
1:04 PM, April 02, 2009

kd said…
I got a simple abacus to "play" with during homeschool and Google helped me find your blog - I'm so grateful! The Benezet learning experiment is fascinating, though I definitely agree with your points... Now I just need to find a good way to go about teaching "reason" to my little boys!
4:50 PM, April 02, 2009