Showing posts from January, 2016
Show all

Math Mammoth on sale at the co-op

Math Mammoth is on sale!

Get 25% off of all Math Mammoth & Make It Real Learning products sold at Kagi (downloads and CDs). The offer is valid till January 31, 2016. Use coupon code JAN2016 at Kagi store, on the 2nd page of the order process. You will find links to Kagi's order pages at MathMammoth.com on the various product pages. Or, if you are ready to order, you can use these direct links to the order pages: Order Light Blue series Order the International version Order the South African version Order Blue series Order Spanish versions of the Blue series books Order Golden and Green Series Order Make It Real Learning activity workbooks Order Bundles (CDs or downloads) Order Review workbooks Sincerely, Maria
Post a Comment
Read more 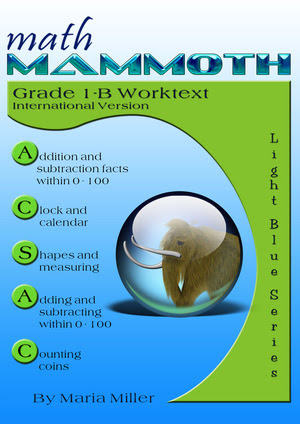 INTRODUCING... Math Mammoth INTERNATIONAL Version! Currently available for grades 1-4, this version differs from the US version in these aspects: The currency used in the money chapters in grades 1-3 is the Australian dollar. (The download versions for these grades include the chapter on money also for US, British, European, South African, Canadian, and New Zealand currencies.) The curriculum teaches the metric measurement units. Imperial units, such as inches and pounds, are not used. The spelling conforms to British international standards (British English). Page (paper) size is A4. Large numbers are formatted with a space as the thousands separator (such as 12 394). (The decimals are formatted with a decimal point, like in the US version.) Check it out at the link below: Math Mammoth, International version
Post a Comment
Read more
More posts