Showing posts from April, 2013
Show all

Filling in the gaps with Math Mammoth - testimonial

April 25, 2013
I just wanted to share this testimonial that Lisa K. sent in a few days ago. I find this situation is fairly common among children who come from public school and start Math Mammoth - they are behind in math, sometimes very much so (many grade levels). Yet, it's not a time to despair, because it IS possible to catch up! It is often necessary to go back and make sure all the basics are mastered. Then, the child often progresses at a much faster pace, and within a few years they usually attain grade level. The idea is not to have a race to keep up with public school, but to gain a solid  understanding of math for life. Here's Lisa's comment. Her daughter still has some more catching up to do, but she's progressing at a good pace! Maria, I just have to thank you for your wonderful math program. I emailed you late last summer about my 6th grade daughter who was terribly behind in math. You suggested I start her back in the grade 1 book to give her a fresh and s
Post a Comment
Read more

My Dear Aunt Sally - game for order of operations

You've surely heard of the acronym PEMDAS for the order of operations (Please Excuse My Dear Aunt Sally) - standing for Parentheses, Exponents, Multiplication & Division, Addition & Subtraction. There's a new game for order of operations called My Dear Aunt Sally . You can play it free online, or purchase an inexpensive app for your tablet. It's a very good game, and takes some thinking! You need to place the given numbers into two expressions so that the operations make the two expressions have the same value. Here are some screenshots. The first one is the easiest level. The addition on the top has to have the same value as the multiplication/addition expression on the bottom.  It gets harder if you choose to include exponents: You can also choose to use fractions, so it becomes harder yet:
Post a Comment
Read more

Some 3-d geometry and knife, and your breakfast bagel will turn into a two-twist Möbius strip ! Bagel by George Hart
Post a Comment
Read more 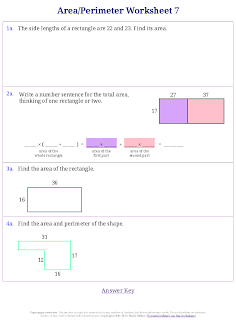 Here is the newest worksheet generator that I have added to HomeschoolMath.net: Area and perimeter of rectangles/squares  It is very versatile and makes many different kinds of problems related to the area and perimeter of rectangles and squares. You can make: problems for the area and perimeter of rectangles and squares, with grid images or normal images word problems, including ones asking for a side length when area or perimeter is given problems with irregular rectangular shapes problems to practice distributive property with two-part rectangular areas (required by Common Core Standards in 3rd grade). You can make worksheets with just one type of problems from that list, or mix them up however you want. For example:   (in your browser options, make sure background colors get printed) I especially made this worksheet generator because I feel many children may have some difficulty with the new Common Core Standards requirement for 3rd grade, that is 3.MD.7.c &
Post a Comment
Read more

Google's logo for today (interactive, by the way) is a tribute to Leonhard Euler -- a very famous mathematician from the 1700s. Today is the 306th anniversary of his birth (he was born on April 15, 1707). You'll hear about him when you study calculus. The constant e bears his name. Euler's identity, or the formula e iπ + 1 = 0 is called the most famous formula of mathematics. It ties together the important numbers 0, 1, e , i , and Pi. Euler also discovered the formula V  −  E  +  F  = 2 relating the number of vertices, edges, and faces of a convex polyhedron. A lot of the notation we use is attributed to him: for example, Euler was the first to write f ( x ) to denote the function f applied to the argument x . He also introduced the notation i for the imaginary unit and the Greek letter Σ (sigma) for summation. Then, if you study graph theory, you'll immediately encounter the famous problem about the Seven Bridges of Königsberg. Euler solved that,
Post a Comment
Read more 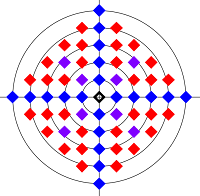 Math Teachers at Play carnival #61 is posted at Math Hombre. It looks shock full of good posts - waters my "math mouth!" Unfortunately, it may take me till next week to get to reading all that but it really looks good. Go check it out!
Post a Comment
Read more

Practice math during a break

I found this nice post from a fellow Math Mammoth user: 10 Ways to Practice Math During a Break Wanted to add two other ideas to her list: Use online math games - there are SO many! See a list here. Sign up to a free trial to one of the many online math practice curricula . There are many, and they typically offer a 2-week trial. Over the years, we have tried Mathletics, IXL, Dreambox, K5Learning, Time4Learning, Reflex, Math Whizz, and probably a few others that don't come to mind now. I have reviewed several of them. I'm sure you can add to this!
Post a Comment
Read more

Math Mammoth Grade 5 revised version is now out! If you are an old customer and would like the updated files, please use the contact form here and include your purchase information (email/name used, if at Kagi or Co-op). Currclick customers can log in to their account at Currclick and download it from there. Download below: 5-A contents and samples 5-B contents and samples Here's a summary of the changes between the old and the new. You can also find this information here . The biggest changes in grade 5 are that the two optional chapters (percent and integers) have been removed, and the topics in geometry chapter are different. However, overall, the structure and contents of this grade is very similar to the old. Chapter 1 starts out like the old version, with some review topics and multi-digit multiplication. There is now more focus and practice problems on long division with two-digit divisors. One big change is that the lessons on problem solving and equation
2 comments
Read more

Here's something for all of us puzzle lovers: logic imbalance problems invented by Paul Salomon (HT Denise ). You need to order the shapes by their 'weight': Which shape is the heaviest? Which is the second heaviest? Picture by Paul Salomon  Think logically - or write down some inequalities and use algebra. Pretty cool. They are simple, yet captivating. A new, creative idea! Paul also recommends you start making your own imbalance puzzles, as a more 'puzzling' exercise.
1 comment
Read more
More posts