Showing posts from April, 2009
Show all

April 30, 2009
Have you ever wanted to fold a pyramid or some of the other interesting polyhedron out of paper? At least, take a look at the pictures! www.korthalsaltes.com provides hundreds of free printable paper models for various solids, including platonic solids, pyramids, and lots of polyhedra. Some are available as colored versions also. Folding and gluing one or two is a great summer math project also, and will keep kids busy for a while.
1 comment
Read more

April 29, 2009
Houghton Mifflin Harcourt has just announced the launch of a new math curriculum, titled " Math in Focus ", which is adapted from Singapore's most widely used program, My Pals Are Here! Maths . Who would have thought! Not I. This series contains "carefully... paced instruction of fewer topics at each grade in greater depth to ensure mastery". That's exactly what I've wanted to see in school books and what I have tried to create with Math Mammoth. It also has a close alignment to the NCTM Focal Points, a "concrete to pictorial to abstract" approach, and instruction centered around problem solving using multiple models. I feel quite surprised. See Math In Focus website for more. It appears NCTM's Focal Points are having their effect.
5 comments
Read more

April 22, 2009
I received this comment a few days ago concerning my Coherent Curriculum article, and I thought it's enlightening enough to post here as well (emphases mine): I am a retired public school teacher. I taught first, third, and 1-5 self contained LD and resource classes 1-5. As I walked the halls of my school and heard the lessons being taught, I was so enraged! I knew students sitting in those classes that had learned those skills I still heard being taught and retaught. The work on display outside the classrooms showed very little improvement beyond what the same children had done in the earlier years. We spin our wheels over and over teaching the same thing year after year and wonder why they can't do better on testing. They are bored to death. This is not just in math. It is in phonics, language skills, creative writing, basic logic skills. As a nation we teach a " swallow and spit back out " curriculum that is mandated by the state standards . If a child is capab
8 comments
Read more

April 20, 2009
Continuing on with the exponents, I have another video about negative exponents. Check also the "prelude" to this, my video on zero exponent . Negative Exponents: Learn Them with a Pattern! In books we usually find the definition that x −n = 1/x n or perhaps x −n = (1/x) n (you take the reciprocal of x and use the opposite of the exponent). But again, I want to highlight that we DON'T have to just "announce" to students this definition or how negative exponents are done. We can justify it. In the video, you can see this done first with the help of a pattern, where we go from the positive exponents to zero exponent to negative ones. I also show another way of showing your students why negative exponents have been defined the way they are. If you look at the shortcut for dividing powers with the same base (I used 6 3 /6 5 in the video), we can simplify as usual and arrive at 1/6 2 . However, the shortcut says we can just subtract the exponents, so 6
2 comments
Read more

Zero Exponent - with a Pattern!

April 18, 2009
Many school books just "announce" the rule or the fact that any number to zero exponent is one (excluding zero to zeroth power, to be exact). I like to call this "announced" mathematics - it's math without justifications, without explaining the "whys". In the video below, I show you a better way, where we approach it through a simple pattern. This justifies the rule and makes it logical, instead of just a piece of "announced" mathematics without proof. Zero Exponent video I also show another way of justifying it, which has to do with the shortcut for multiplication of powers with the same base. For example: Following the shortcut for multiplying powers with the same base, x 7 x 0 = x 7 , because you can add the exponents 0 + 7 = 7. This is an equation where x 7 is multiplied by x 0 , and the result is x 7 . What must x 0 therefore be? It must equal one. See also my earlier article on this topic: Negative or zero exponent .
2 comments
Read more

April 18, 2009
As I seem to be lacking creative ideas for blogposts on my own blog (though I'm working on two new videos), I suggest you head to Math Teachers at Play blog carnival. Lots of good stuff there! For example, MathNotations is holding a second (free) math contest , and I found some neat Russian-style "subtraction" problems . As always, Denise has illustrated the carnival beautifully.
Post a Comment
Read more

Open house at LearningA-Z in May

April 15, 2009
LearningA-Z.com is holding its annual Open House during teacher appreciation week May 4-8. "Our open houses will give you the opportunity to download some of our resources and try them out with your students." There are six different websites that form Learning A-Z. They have mostly downloadable materials, centered on reading, writing, vocabulary, and science. Sorry, no math. But I wanted to pass it along because it is a great opportunity to sample their materials. Register for the Open House here: http://www.learninga-z.com/TeacherAppreciation
Post a Comment
Read more

I was just sent a link to this site; all it is, is a handy one-page printable conversion chart for various US measures, metric measures, and US vs. metric measures. Includes even a comparative Fahrenheit vs. Celsius thermometer. http://metricconversioncharts.org/
8 comments
Read more

April 04, 2009
The 4th edition of "Math Teachers at Play" Blog Carnival is posted at Homeschool Bytes. My entry was about division of fractions... There are posts for those taking "baby steps", "childhood steps", "adventuring steps", and "running steps". Go check it out!
Post a Comment
Read more 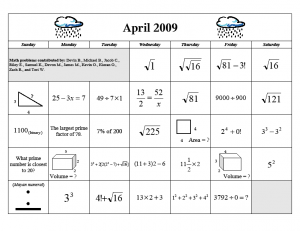