Showing posts from February, 2013
Show all

February 15, 2013
I know I'm late at blogging about this but here goes anyway. Curtis Cooper at the University of Central Missouri in Warrensburg has found the largest prime number yet. (He hasn't found the largest prime as there is no such thing -- he's just found a new prime that is larger than any other primes people have found.) It is a Mersenne prime, which means it is of the form 2 P − 1 , where P itself is prime. The one Cooper found is 2 57,885,161 − 1 , and it has 17 million digits!!   So no, I'm not going to type it out here! Writing it in the form 2 57,885,161 − 1 is way handier, isn't it? Shows us how important exponents are. So, this new prime is 2 multiplied by itself 57,885,161 times, and then you subtract 1. This is what Cooper himself says about the hunt for new primes: "Every time I find one it is incredible," Cooper said. "I kind of consider it like climbing Mount Everest or finding a really rare diamond or landing somebody on the moon
1 comment
Read more

Math Teachers at Play blog carnival #59 is posted at Learners in Bloom. Looks good, as usual! I want to especially check out the various science and math Youtube channels mentioned -- hope to find time for that. A quick question I asked my daughter as posting this: is 59 a prime number? (She's reviewing factors and primes right now.) Just one example of how you can just weave math into everyday life. Another question I asked her just a few minutes ago at the lunch table was to find a prime between 90 and 100. And she found it!
Post a Comment
Read more 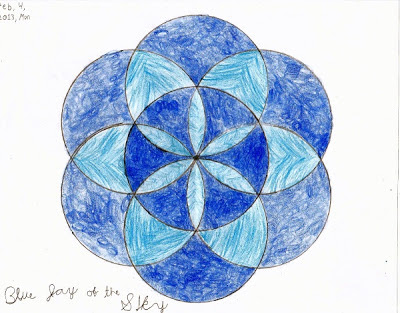 I got inspired by the blogpost Art School | Geometric Design with Islamic Art where Deborah shows how to make a neat flower design with seven circles , using a compass, and then coloring it using 2, 3, or 4 colors (or however many of your own). I think it ties in neatly with mathematics, and lets students practice drawing circles with a compass.  My girls loved the art/math project. Here are pictures they made: Here are step-by-step instructions for the flower design: 1.  Draw a line and a circle so that the circle's center point is on the line. Then mark the points where this circle intersects the line. 2. Use those points as center points, and draw two more circles. The radius is the same all the time, so make sure you don't change it on your compass!We used 5 cm as the radius, and that made the whole design fit neatly on a regular letter size paper. 3. Now note the two points marked in the picture. They will be used as center points in the next
Post a Comment
Read more

Möbius strip is a fun object to play with. The video below by Vi Hart has a little story to go with the idea: Wind and Mr. Ug. My girls were wondering how come Wind can come home and there's already a message ready left by Mr. Ug? When did Vi write that when doing the video? And why does Wind never meet Mr. Ug? See if you can solve the mystery... While they were watching, I made my girls some Möbius strips and let them draw a line or a "fence" around them. I cut one apart in the middle to show what happens when an "earthquake" hits... Like I said, simple and fun. I found the video via this blog post that uses a similar idea, but with Moebius ants (easier to draw!).
1 comment
Read more
More posts