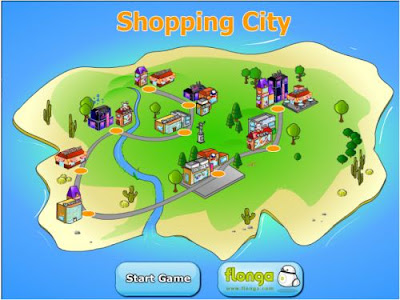 My daughter asked me to check out Shopping City game at HoodaMath.com, and so I did. Well, I became hooked... it's one of those "addictive" types of games. I spent nearly a week playing it every day, until I was able to finish all 9 levels.

I decided to write this blogpost about the gameplay because in the end, to be able to finish the last level, I had to do some serious analyzing of various factors in the game, which definitely reminds me of solving and analyzing math problems.

On each level, you are shown an empty street map, and your task is to build stores and to earn a certain amount of money in a given amount of days. As the levels progress, the street map gets more complex, you have a bigger goal to achieve and more days to do it. In the last level, you need to earn a million dollars in 29 days.

Then once you start the game, people start walking in from various directions, visiting the shops, and spending their money. Click to enlarge
For the most part, I played the game kind of randomly, building different kinds of stores randomly here and there - toy stores, boutiques, pet stores, restaurants, jewelry stores, and so on. That strategy seemed to work alright in the beginning... but then the game got harder.

I was not able to finish the last level without thinking about and analyzing several things. I even wrote out how many percent I earned each day, and if I was falling behind my "best play", I would quit and start that level over (which you can do by pressing the "menu" button). I reached 96% or 97% several times before succeeding in reaching 100% in the 9th level.

I'm going to share some tips now for playing the Shopping City game. Warning: if you want to figure out these things yourself, don't read on! Just go play it. Of course, part of the fun IS when you figure out the strategy yourself. In fact, you could even use this game TO teach analyzing skills to youngsters.


Hints for the Shopping City game

The game itself gives you some instructions, such as the fact that the customers won't go to two of the same kind of stores, but they will visit a store and an upgraded version of the same store. Or, that corners are important locations.

Maria Miller said…
I don't know. But I did notice that once the game loads, you can take off the Internet cable and the computer will play the game for you offline.
8:34 AM, April 28, 2010