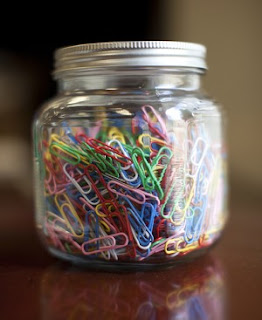 A typical estimation problem:
guess how many paper clips are in a jar?
Photo by Dean Terry
Here recently I was asked a question about estimation methods:


My daughter's homework was to estimate the number of 953 divided by 18, using front-end estimation, using rounding to estimate, and using compatible numbers to estimate. What are the differences between these three methods? Do we get the same result? Thanks!

You definitely don't get the same results as these three methods are quite different!

Anonymous said…
I feel frustrated now for not knowing how many paperclips are in the jar.
2:33 PM, September 07, 2010

Homeschool Blog Parade said…
You explain this SOOOO well! I am so glad I found your blog. It just so happens I am working on front end estimations with my 7th grader, and I think this will help. Thank you!
2:18 PM, September 15, 2010

Maria said…
Thank you so much for the informations. I've used your website for helping my students before I go to textbook or worksheets. Thanks again