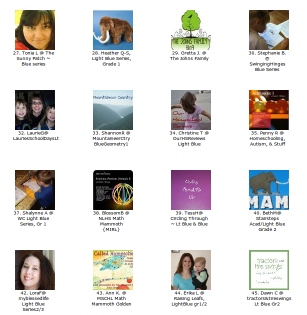 TOS Review: Math Mammoth from Miscellaneous Musings
"My daughter took a break from her other math curriculum and began focusing just on fractions with the Math Mammoth blue series which includes explanations. About three weeks later she was able to test out of an entire text on fractions"


Review: Math Mammoth from Footprints in the Butter
"And I started this school year completely stressed about what to do with math. So finding out I'd be reviewing Math Mammoth again this year was a gift from God."


Math Mammoth -- A TOS Crew Review from Mountaineer Country
"Do you know what my daughter said to me? She said, rather matter-of-factly, “Why haven’t we been doing this all along? I love this math.”

TOS Review Math Mammoth from Circling Through This Life
"She really enjoys it. She calls it her “Elephant Math” and insists that Manny, her woolly mammoth do math with her. "
This review has a cute picture of a stuffed mammoth next to the girl's math work!

Math Mammoth~ TOS Review from Adventures in Unsell Land!
"We have used quite a few various math programs through the years between our 6 children and I have never seen one that is as strong on the mental math as Math Mammoth is. It's my favorite aspect of this program."

Math, it’s a Mammoth responsibility from A Teaching Heart
"It is suggested that you introduce multiplication before division, but other than that, you can proceed through the lessons as you wish. I find that mixing up the learning of multiplication with other math concepts gives Hunter’s brain a chance to process and retain facts. So we will be jumping around the books all year."

Loving learning at Home said…
We really enjoy Math Mammoth. Thanks so much for the opportunity to review it.
8:38 PM, November 23, 2011

Gretta said…
This has been a great supplement to our Math curriculum. Thank you for allowing us to review it...and discover we love it!