November 11, 2011
I intend to publish several of these "stories" or "reports" from teachers who have been using Math Mammoth. Here's the first one, from Megan in Belgium. She used some lessons from my Math Mammoth Geometry 1 book.

Presentation of the Class and the School
I am a 1st, 5th and 6th grade teacher in south Belgium. My school is what we call an “immersive school”. The students are taught in French, their mother tongue, 14 periods a week. During the other 10 periods each week, class is given in English – the students are “immersed” in the language from the age of 5 and learn to speak this language in a very natural manner.
Because of these awkward hours, we teachers “share” the classes. In order to have a full schedule, I give class in English 10 hours a week in 5th grade, 10 hours a week in 6th grade and 4 hours a week in 1st grade. We also split the subjects between French and English – and Geometry is one of the subjects seen in English.
Now, the immersive program is not without its downfalls, one of which being that we must consecrate two times as many periods per week on Language Arts, as we have both the French and the English language to teach. As a result, we have less time to teach everything else.
I am also a first-year teacher, thrown into this system with no life-lines to cling to! I was searching desperately for a guide, something to help me, but also for something that would help my students understand this subject that is such a part of our everyday lives, yet seemingly so abstract. When I saw Maria Miller’s offer – one “free” e-book in exchange for a report of my experiences – I couldn’t turn it up! So, without further ado, here is what I have to say about Math Mammoth.

Session 1
I started the year teaching lines and angles to both the 5th and 6th graders. Most of the 5th graders did poorly on the test and some of the 6th graders needed a refresher course.
For the 5th graders, I dove right into the Geometry 1 Elementary Math book in order to review the different lines and angles, as well as how to draw them (chapters Lines, Rays and Angles and Drawing Right Angles). I did not print out and photocopy the pages exactly as they were, I chose instead to pick and choose the exercises I found most appropriate for my students at the moment. I must say though, I felt no need to modify any of the problems, as I usually do with workbooks.
The reaction from my students was a good one, especially concerning the term ray. Most of them had such a hard time remembering what a ray is and the image of the sun and its rays was just the trick they needed! Their results were very satisfactory – though they all had a hard time with the construction of the squares and the rectangles! I don’t think they’ve passed a lot of time on that as of yet, and I hope it is a point that MM covers more thoroughly later on in the program. All in all, the weaknesses I noticed from the test have now been overcome, except for one or two exceptions of course.
A great point about these exercises is that I could let most of the class work independently while I spent a bit more time helping the slower/weaker students. Everything is very clearly explained and easy to follow and understand, even for 5th graders whose native language is not English.
For one of my 6th graders, I started him off with the chapters Measuring Angles and Drawing Angles as I noticed he had difficulties using his protractor. Once again, I did not give him all the pages in these chapters, nor did I alter anything. (As a side note, it is quite nice to have such a great bank of problems at the ready – I usually spend more time perfecting my worksheets than the children spend working on them!) He whizzed through the exercises and truly surprised me with his improvement. It’s as if a light bulb went off in his head. I don’t know if it’s because of the book’s explanations or not, but I’m glad it happened! He’s now at the same level as the others.
My other 6th graders did not receive sheets from this book during this period. 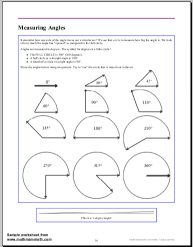 Sessions 2 and 3
For this work period, I combined the chapters Measuring Angles and Drawing Angles for the 5th graders. I let several children do some examples on the board and then students worked quietly on the worksheets (which, again, I did not modify, save the page-layout). They finished these quickly, though that was because of laziness from most of them. They were convinced that the angle was still alright; even it was a few degrees off! The papers were returned to them the next day and the redone angles were more than acceptable.
I am not sure about this, but I am getting the impression that Belgian students see certain geometry concepts earlier than their American compatriots. I am not saying that these concepts are known and mastered by Belgian children (far from it! :p), but they do have some bases to work from. I have yet to explain a point starting from zero knowledge, though the book sometimes seems to suggest that the concept is completely new. 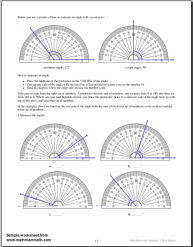 Nevertheless, the MM book is so clearly laid out and the explanations are so concise and understandable that I feel more confident myself in explaining the different concepts to my students. Also, it is a lot easier for students to look at a piece of paper right in front of them and follow along with the pictures than just doing the examples on the board alone. The drawn protractors act as a sort of teacher’s aide – I don’t have to walk around to verify that each child has placed their protractor how they should because they can clearly see how the protractor is supposed to be on their paper.
Also, it was very practical as I make sure to have the papers for the next lesson printed out for my “ace” students that always finish well before the others. Because of their clarity, these students can often get right to work without any additional explanations.
The 6th graders are busy doing precision drills and going over drawing basic geometric shapes (I’m surprised at how many of them have a hard time drawing a square!), though I am not using MM for their work.

Session 4
This session was dedicated to the Estimate Angles chapter in MM. This was a breeze for my 5th graders – much to my surprise! We started the lesson out by doing a few examples “in real life” using chalk on the playground outside and our giant chalkboard protractor. Walking the lines and making the turns themselves really helped them understand what the directions meant when they said “turn 45° to the left”.
I must admit though, the last exercise had everyone baffled! I still don’t know what the secret message is (I could look at the answer key, but where is the fun in that?)! Nevertheless, the children enjoyed trying to figure it out, and then trying to find where they went wrong in their drawings. It became a very rich activity in which the children analyzed and found their own errors, as well as the errors of others.

Sessions 5 and 6
We worked on the chapter Parallel and Perpendicular Lines for these last two sessions. These concepts had already been touched upon in the earlier chapters, so it was more of an in-depth review than a new concept for them. This really helped set things straight in their heads and served as a great closing lesson for the first part of the school year, before leaving for a week of vacation. Most of the work during these two sessions was done individually while I worked with a few children in need of an extra boost.

Evaluations
I included three evaluations in this first part of the MM curriculum: one on Lines, Rays and Angles; another on Measuring, Drawing and Estimating Angles; and the last one on Parallel and Perpendicular Lines. These were tests that I created myself, based on the concepts covered in the MM chapters.
I never had more than three or four students out of twenty fail the tests, but these are also the students who present very important weaknesses in nearly every subject matter. The other results were more than satisfactory and provided for a very impressive first report card. (As a first-year teacher, I was very proud to have been able to show the parents that their children had indeed learned something with me.)

Continuation
I plan on using MM for the rest of the year with my 5th graders, while adding my own touches. We’re going to start with the triangles, but before using MM, I would like to use a more active approach for the discovery of the different types (let them create the different triangles themselves, for example).

Final Word
I find MM to be very complete, though a bit traditional. Perfect for homeschooling parents who have little or no pedagogic experience, but I think it could benefit from the addition of a few hands-on discovery sessions. (Though I do believe that Maria speaks of a curriculum that shows how math is useful in everyday life… this could also be very interesting for a hands-on approach…) I have no problem with the hands-on approach, but I was rather blocked by the theory part of the geometry… MM is my perfect complement! I would have been very lost this year if not for this amazing find.
I would like to thank Maria for this wonderful opportunity, apologize for the absence of photos (I always get so caught up in my lessons and with my students that the camera stays inactive on my desk!) and I do hope that my words and my experiences can help convince others of MM’s wonderful structure, clarity and presentation.


Click the link to read more about the book Math Mammoth Geometry 1 and to see its FREE sample pages!
geometry Math Mammoth