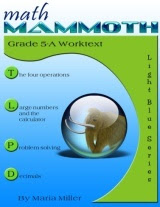 The biggest changes in grade 5 are that the two optional chapters (percent and integers) have been removed, and the topics in geometry chapter are different. However, overall, the structure and contents of this grade is very similar to the old. 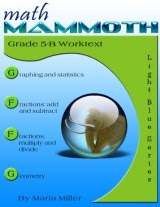 As you may know, this is also the version that is aligned to the Common Core. It turns out that some may think the alignment is not "perfect", as I felt I needed to include a few things outside the standards. Like I've said before... I do not feel Common Core Standards are "all-inclusive". In other words, if something is not mentioned in the standards does not mean that you leave that out.

For example, rounding and estimating are not mentioned in the standards for 5th grade. However, since students learn and use bigger numbers in this grade than they did in 4th grade, I feel it is good to review and practice them one more time.

Yet one more: 5th grade standards do not include any statistics topics. However, I feel students will benefit from being introduced to some of the concepts (line graph, histogram, mean, and mode), and from being used to analyzing graphs in order to prepare them for 6th grade statistics topics, which are somewhat advanced. In 6th grade, students will study for example interquartile range and/or mean absolute deviation, and will need to relate the choice of measures of center and variability to the shape of the data distribution and the context in which the data were gathered.

Lisa Fredo said…
I have been following your blog and really like it. My son (he is in Kindergarten) uses Math and IntelliAbility program at Intelliseeds Learning. I have been homeschooling him so far and I have found content useful. So far he has enjoyed it. Can you check with your user community about best practices around Intelliseeds? If there are other parents, I would like to connect with them and get their feedback.
1:26 AM, April 03, 2013

Maria Miller said…
It looks like Intelliseeds is an online practice system for some math and English topics. There are many such programs (see a list I maintain on my site). I'm sorry though, because I don't know where you would find other parents using Intelliseeds.
10:22 AM, April 06, 2013