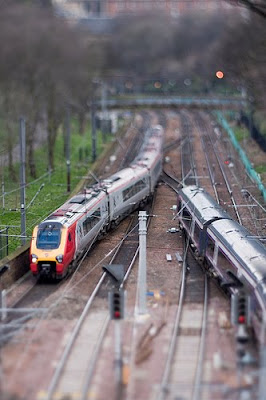 Again, an algebra problem about speeds. Again, we will make a simple table about the two trains. The table will have columns for speed, distance, and time.


Notice the problem says "in the same time". Let's call that t.


Of course, the goal is to have an equation in a single variable, not in two variables (t and v).

Since the time is the same, we can build an equation of the time t = ... for both trains, and then set those expressions to be equal.

Cassidy Cash said…
Hey! This is a great website. I'm glad you're putting up the examples and sample problems. Some things you might consider adding, though, are some clarification points. For instance, you might state that Distance = Rate(Time) and that Rate is the same as speed for this level of math since speed is being expressed in rate form. A lot of students will be looking at these concepts for the first time and may not realize those things.
6:31 PM, March 17, 2010

shooterboss said…
Hurray! I got this one correct on my first try without looking at any parts of the solution!
2:23 PM, June 15, 2010